Scott has waited his entire life for this… the Kansas City Chiefs won the Super Bowl! #ChiefsKingdom 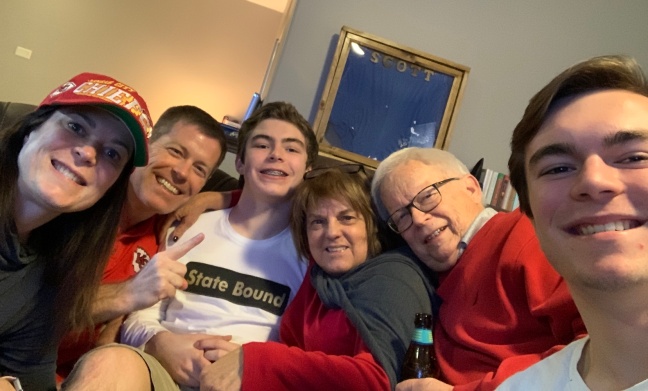 It has been 50 years since they’ve won a Super Bowl game. Scott bet $50 on the game when we were in Las Vegas last summer. The odds were 6 to 1, so he made a little profit on that bet! Even though we’re three hours from Kansas City, everyone has been wearing “Chief’s red” all week.

Oma and Papa came and stayed for the whole game – which for sports fans wouldn’t  seem like a big deal. But considering they usually bore of the game around half time and wander home, this was one for the record books.

The Chiefs played against the San Francisco 49ers. With Lisa and the Dyer cousins living in San Francisco, there might have been a little smack talk going on before and during the game. Lisa was rooting for the Chiefs, but she was alone in her loyalties in California.

After the game, we facetimed the Hilgers who were outside watching the fireworks and parties going on in Kansas City. Today, I heard most schools in Kansas City announced they’ll be closed Wednesday – “Red Snow Day” – in honor of the parade welcoming the Chief’s home.

The halftime show was Shakira and Jennifer Lopez – a high energy, 30 minute performance that would leave even the best athlete out of breath. In case you are wondering, here’s a site that rates every halftime performance since the first televised one in 1993, which featured Michael Jackson. We’ve come along way since 1993.

And the commercials this year? Meh. They just aren’t as good as they used to be.