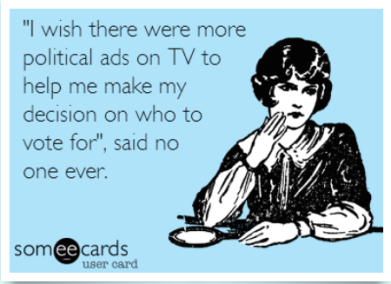 This is not a political post, so don’t make it one.

Half the time, I don’t even understand politics.

But what I do know is that it’s the day before Election Day and I’ve received six “robocalls” from political candidates asking for my vote. My neighbor said she received nine phone calls.

This election season has been one for the record books. I’ve never seen so many television ads,  received so many phone calls or seen so many direct mail pieces. Granted, we have several interesting races this election, but here’s the deal: A television ad or phone recording is not going to sway my vote. In fact, it’s irritating and exhausting. So much so it makes me NOT want to vote. Which is bad.

What if candidates were only allowed to say what THEY were going to do to better life in Kansas? What if they weren’t allowed to call households with their cheesy recordings?

And don’t spew out statistics and studies because we all know you choose the numbers that make you look good and your opponent look bad. Why wouldn’t you?

And do you really think sending your people to my doorstep is productive? You think I’m going to say “Oh wow…thanks for giving me this information. I will for sure vote for you now.” You know what? If I want to know something about you, I can find the information myself.

I jokingly posted on Facebook about starting a “Voters against Robocalls”…but it’s not a bad idea.

This blog includes posts from my everyday family life + posts about communication, marketing PR, technology, parenting and any other random thoughts.