For the first time in 10 years, we are not spending Spring Break on the slopes. COVID-19 has disrupted our lives like never before. We are all pretty bummed about it, but the slopes closed two days ago, and it’s not safe during this health pandemic. I usually do a Spring Break post – so here it is…sadly, it won’t be as fun as the last 10 years’ posts.

Most restaurants closed their dining rooms and allowed take out or drive thru only.

Scott and I cancelled our PTO this week. The boys must spend their Spring Break at home, away from their friends. That really sucks. 😕

Tonight, Scott gave us a 15-minute lesson in taxes. 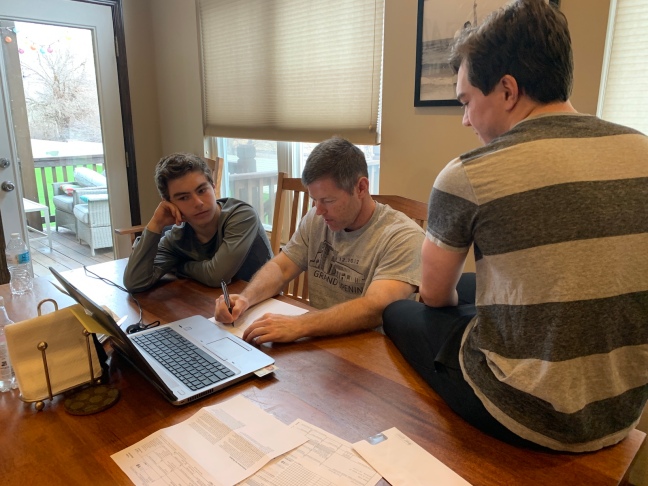 Two hours later, we finished the lesson and had done Adam’s taxes. Scott informed us that tax brackets had been around since the 1800s. The 17-year-old called #fakenews and informed him the graduated tax brackets did not start in the U.S until the 1930s. Google confirmed. Thanks AP History class!

Today, my employer announced we were to work from home indefinitely, and at 4:30 p.m. the Governor of Kansas ordered all Kansas public school buildings to close for the remainder of the year. FOR THE REST OF THE YEAR.

A flurry of texts and Facebook messenger messages ensued. What. Is. Happening.

I ordered food via online pick up. Under normal circumstances, I can schedule my pick up in four hours. Not this time – Friday at 5 p.m. was the first available time.

Scott and I are both working from home.

Cox came to fix our outside box cable box while I was a on a video conference call. He informs us he needs to take down the Wi-Fi for a moment…shouldn’t be too long. 😒

I disconnect from the call and rejoined using my phone. Later that day, Scott was fixing his lunch and opened a bag of chips. Loudly, while I was on a video conference call (we use a lot of video conferencing, especially now during the coronavirus outbreak).

San Francisco went on lockdown, so we talked to Scott’s sister to get the scoop. The states of New York and Illinois soon followed. With those three areas on lock down, one out of five people in the United States are in “shelter-in-place” mode.

I decide to move my work space downstairs. I’m set up on the poker table, surrounded by Legos. It’s not the best setup. 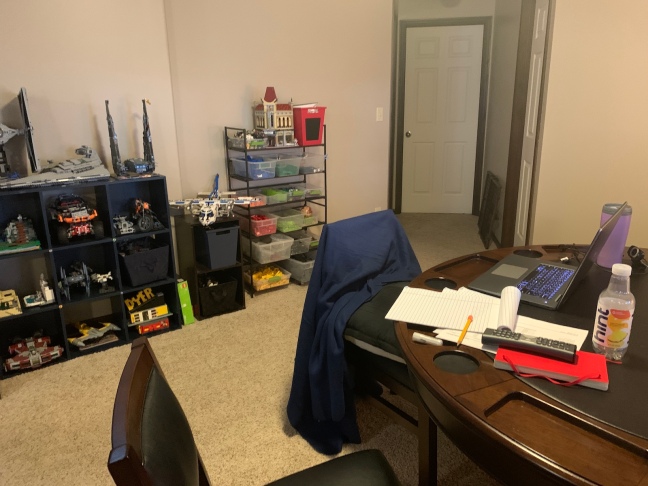 I’m contemplating going to the office to get my double monitors, but I’m not sure where I would set those up. Scott is set up at the kitchen table.

It was the first nice day we’ve had with temps in the 70s. In the afternoon, I had the bright idea of working on the deck. I had a video conference call (again) – which didn’t quite work as the train went by.

We played Scattergories via FaceTime with Oma & Papa and the Hilgers.

Scott cleaned out one of our storage rooms and it was the first time I had left the house since Monday. I had to pick up the groceries I ordered on Tuesday. About a third of my order was “out of stock.” I decided to go inside, to see if anything had been stocked since my order was filled.

The shelves were worse than the last couple of times I have gone. Along with usual out-of-stock items like bread and eggs, there was no fruit (again – except pineapple), no lettuce, celery or carrots. Who hoards celery? Hardly any meat or canned goods. That’s as far as I got in the store before I gave up and left.

Friday night we watched Back to the Future II, a favorite 80s movie even the boys enjoy. Not as good as the first one though.

Saturday, we found out the van battery was dead. Scott watched a YouTube video and changed it himself. Then we headed to Sand Hill State Park for a mental break and outdoor social distancing.

St. Louis and Kansas City announced city-wide lockdowns to start soon. I have a feeling our community is next. Starbucks announced only select stores would be operating drive thrus. For us, that means the only one open is a 25 minute drive away. 😱#firstworldproblems

This was a super lazy day – I’m not even sure what we did. Our county decided against a stay-at-home” order, despite community feedback that there should be one.

This blog is an assortment of my everyday family life + random posts about creative communication, marketing, PR, technology, parenting and any other thoughts.