Sadly, I have no recollection of anything happening today. 😆

We “zoomed” with Oma & Papa and the Hilgers.

Adam decided to drag out all the Lego’s again (that’s what a stay-at-home order will do to a teenager). He sorted all the instructions and decided to rebuild the big ones like the AT-AT, haunted house, police station and a few others.

We watched marble racing on TV. For real. There is such a thing… 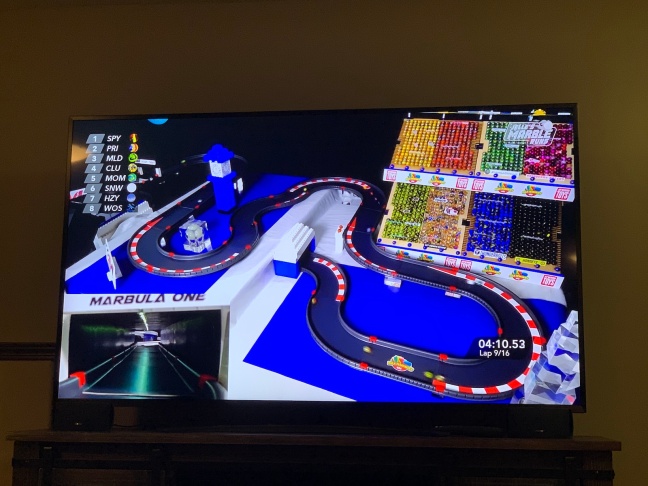 Since there are no sports going on, there’s things like marble racing and watching an animated car race featuring real NASCAR drivers.

Lego Masters was on next. We learned the correct pronunciation of the AT-AT is “at-at” (rhymes with “hat-hat”), not “ay-tee, ay-tee” like we’ve been doing since the first movies came out in the 1970s. #themoreyouknow

Then watched Eating History, a show where two guys eat expired food. I mean… Tiger King and now this?

About 97% of the country is under some kind of social distancing orders.

We watched Iron Man 3, the next Marvel movie.

Another day of social isolation. The weeks and weekends all seem to merge together now. Since we can’t go anywhere, the days seem the same. Even the boys have done homework on Friday or Saturday night now…because why not?

All 50 states are under “disaster declaration” for the first time in U.S. history.

It was 80 degrees today so we headed to Oak Park for Social Distancing Saturday. We are running out of parks to go to that are within an hour drive time.

The boys then cleaned out the leaves from underneath the deck. Such good helpers.

We played Monopoly City, a game Adam has been wanting to play since he got it…10 years ago. The problem is that it’s a lot more complicated than regular monopoly, and you should allow about four hours to play it.

17 million people have filed for unemployment in the last three weeks. Some experts think the U.S. could hit an unemployment rate higher than that of the Great Depression from the 1930s.

I was watching TV downstairs while the boys built with Legos. I miss hearing the clinking of Lego bricks. 😕

We had another Zoom call with our family.